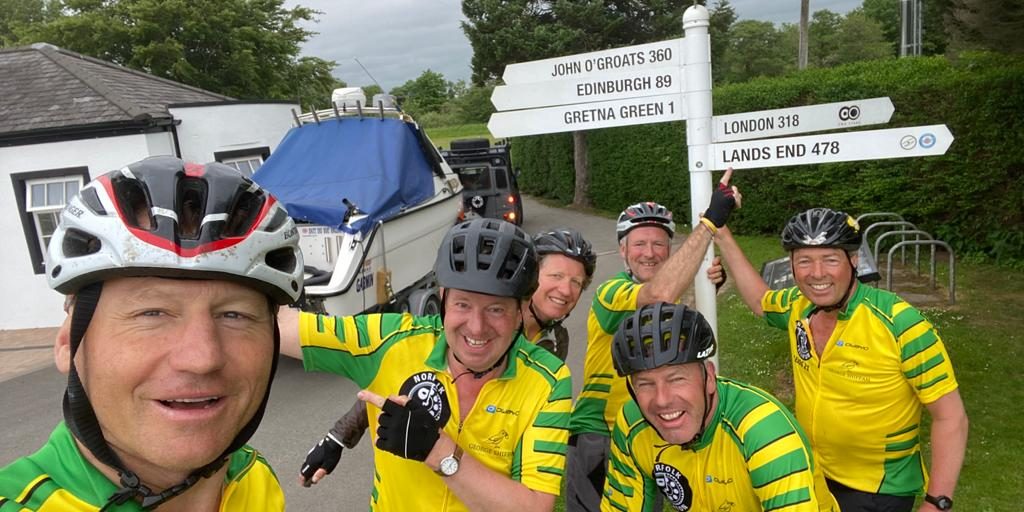 Six men have completed almost a thousand miles of cycling to raise money for YANA and four other charities.

Norfolk Farmer Richard Hirst from Ormesby described the ‘fellaton’ as an incredible challenge. “Especially for those of us who had not previously done much biking! But looking back it has been an amazing experience. Even though it is over, our fundraising web page is still receiving donations. With gift aid, we have raised over £50k for our chosen charities.”

“I chose YANA as my charity to donate to”, explains Richard. “Several people I know have made use of YANA, so it’s a charity very close to my heart. YANA is doing fantastic work and that is why I put YANA top of my list.”

The monies raised by the ‘fellaton’ will be shared between YANA, East Anglian Children’s Hospice (EACH), the Motor Neurone Disease Association, Muscular Dystrophy UK and the Royal Marsden Cancer Charity.

Pushing on their pedals alongside Richard Hirst were farmers Nick Gowing from Mulbarton and Ed Wharton from Stokesby, along with Fakenham-based barn developer Ed Masters and land drainage specialist Justin Morfoot. The sixth cyclist was Mr Morfoot’s half-brother Mike Bartlett who now lives in Dorset but was born in Norfolk.

A team can only perform well with support and that was provided by woodland manager Tobin Lambert from Halesworth who drove the support van.

Peaks and troughs of fundraising

No great challenge is without its trials. The low point that Richard remembers most was in Scotland. “After a really gruelling few days we were cycling downhill at last, but we had a headwind and had to pedal really hard. That was brutal”.

Tough times were cancelled out by the high points. “Every single day the teamwork was amazing. And at the very end, I found that my wife, Katrina, and son, Robert, were there on the finish line.”

YANA is very grateful to efforts such as these that help us ‘keep our wheels turning’ to raise awareness for better rural mental health and provide vital support to those in need. If this – or any other story – inspires you to fund raise then we are happy to show you how to help YANA.